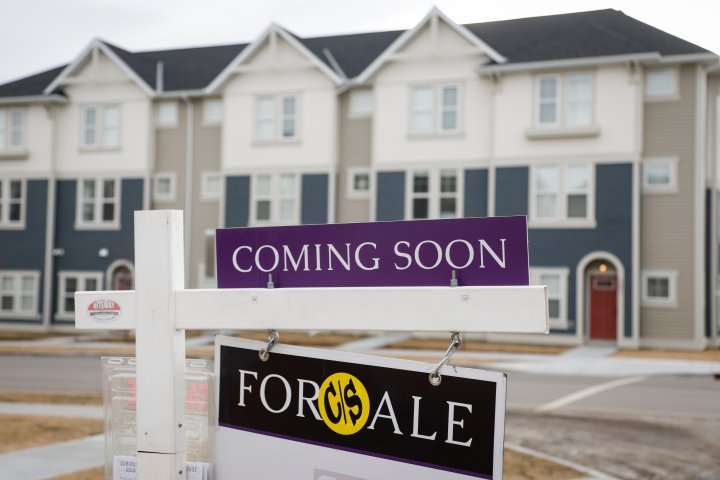 Fixed or variable? How to Choose a Mortgage as Interest Rates Rise

The Bank of Canada’s efforts to calm the housing market by raising interest rates is causing house hunters and homeowners to re-examine the type of mortgage they can take out.

Global News spoke to mortgage experts and economists to help break down the factors consumers should consider when calculating monthly housing payment numbers in a rising interest rate environment.

First, find out about the different types of mortgages available to you.

A fixed rate mortgage offers homebuyers a stable interest rate for a fixed term, usually fixed in three to five year increments over the term of the mortgage.

These rates are not immediately affected by Bank of Canada interest rate movements – although expected increases may be built into the rate offered to you – and therefore offer a little more predictability in your monthly payments throughout long term.

A variable rate mortgage changes in response to interest rate decisions by the Bank of Canada, as financial institutions link their prime rates to the central bank’s benchmark rate. You will then get a discount on top of that.

For example, today’s variable rate mortgage contract could get you the prime rate of 3.2 per cent minus 0.6 per cent, according to Leah Zlatkin, mortgage broker and expert with lowerrates.ca.

To understand how these two types of rates might affect monthly payment strategies, the key factor is the “spread” between them.

Today, Zlatkin pegs the typical variable rate mortgage between 2.3% and 2.6%, while fixed rates hover around 3.89%. The difference is therefore approximately 1.6%.

This spread will tend to contract as the Bank of Canada raises interest rates. Prime rates offered by banks will increase, closing the gap between today’s fixed rate monies and future floating rate payments.

Bank of Canada Governor Tiff Macklem has made no secret that the institution will be “vigorous” with rate hikes in an effort to curb soaring inflation.

The central bank took a rare step of 50 basis points last month to raise its overnight rate to 1.0%. Some economists are predicting another half-percentage-point hike in the next rate announcement in June.

“Everyone has an opinion on where rates are going and no one really knows unless you’re at the Bank of Canada, in which case you’re probably not telling anyone,” Zlatkin says.

Desjardins said in a mortgage rate forecast last week that it expects the central bank to “raise the key rate quickly” over the coming year, but that it will be kept below 2.5%.

The Bank of Canada said last month it believed the “neutral rate” — the point at which interest rates neither fuel nor hinder the country’s economic growth — is between 2.0% and 3.0%. .0%.

If the central bank raised rates this high in the current cycle, variable rates would rise 100 to 200 basis points and mortgage holders with this type of loan would immediately set monthly payments to reflect the higher rates.

Jimmy Jean, chief economist at Desjardins, told Global News that the Bank of Canada’s plans to rapidly raise interest rates could end the popularity of variable-rate mortgages after years of low rates influenced by the pandemic economy.

“We have seen strong demand for variable rate mortgages. But the further we go, the more this gap will narrow. … It might make sense in this context to lock in (the) interest rates that we can get now,” he says.

Sung Lee, mortgage officer at RATESDOTCA, told Global News that in the short term, there is still a “compelling reason” to go for a variable mortgage today, even with more rate hikes on the horizon. . He points to the spread of about 150 basis points between most variable offers and the current fixed rate.

Home prices could rise 15% in 2022 despite efforts to cool the market, says Royal LePage

Although she warns she doesn’t have a “crystal ball”, Zlatkin expects a 0.75% aggregate increase in the central bank’s overnight rate before the end of 2022. For this reason, she asserts that variable rates will remain the cheapest option in the long term. But she notes that the bottom line is not the top priority for the most risk-averse market watchers.

“If you’re the type of person who’s going to watch those Bank of Canada ads every time you have a heart attack, it’s not worth it,” she says. “Just pay a few hundred dollars more and go for a fixed rate.”

There’s another factor to consider with rising interest rates, and it could affect the price of the home you can afford.

The mortgage stress test allows potential buyers – as well as those looking to refinance an existing mortgage – to qualify for the loan at the higher of two rates: either the offered rate plus 2%, or the qualifying rate of 5 .25%.

While those who have sought pre-approval for a mortgage over the past few years may have grown accustomed to qualifying at the 5.25% mark, the current rate hike could mean 3% mortgages being taken. .5% or more.

With the extra 2%, these buyers are now considering qualifying for mortgages at 5.5% or higher. Zlatkin says a couple who might have qualified for a $500,000 mortgage three months ago might only be able to get around $473,000 today.

“Therefore, your budget for the new house has to change as well,” she says.

However, just because your buying power doesn’t extend that far in the current market doesn’t mean it’s not the time to buy.

Rising interest rates are already having a cooling effect on the Canadian housing market, Jean says, with sales starting to “moderate” in most markets and prices in provinces like Ontario and Quebec having potentially peaked.

Lee adds that with rates rising for the foreseeable future, your mortgage is unlikely to stretch much further in the months ahead.

“I don’t think rates are going to come down any further in the near term,” he said. “So if you can now get into something that fits your budget, I think that’s a great plan.”

Fixed or variable? How to Choose a Mortgage as Interest Rates Rise – National