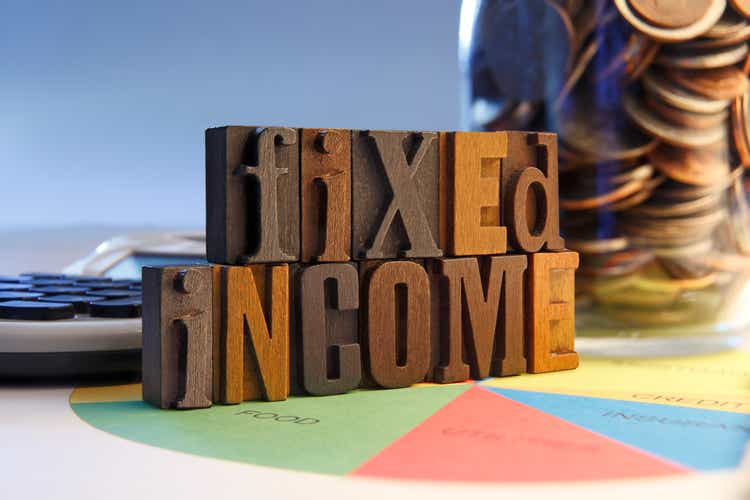 Get ready to stock up on fixed income

I have been an active self-directed investor for over 40 years and have never seen our economy go from good to bad in such a short time. What a difference 18 months has made. Except our leader executive, almost everyone understands that the current state of our economy and its current direction is going to be difficult for many families, in some cases very difficult. However, one of the truisms I have learned over the past 40 years is that investment opportunities can be found regardless of the state and direction of the economy. Inflation is on the rise, even more than expected with the June CPI estimate at 9.1%. This is shaping up to be a once-in-a-lifetime opportunity to pick up fixed income securities at bargain prices over the next 6 months.

I posted a similar article a few weeks ago. With the June CPI estimate coming up, I expect the Fed to hike rates by at least 75 basis points in July with the possibility of a full 100 basis point hike. I decided to double down and identify enough holdings to develop a bond ladder and start accumulating short term debt after the July FOMC meeting.

Just 18 months ago, the economy was buzzing with the lowest rates in about 50 years, falling civilian unemployment and inflation below the Federal Reserve’s 2% target rate. In contrast, today companies are laying off workers or planning layoffs in the near future and inflation is currently estimated at 9.1% and above, the highest in over 40 years. The charts below show increases in the CPI and the 10-year treasury bill rate through May 2022.

The fixed income bull market is clearly over. That’s the bad news. You can, however, turn some of this into good news and maybe good news with a little patience and due diligence.

The Federal Reserve (Fed) is committed to fighting inflation with the two tools at its disposal. Raise short-term interest rates and stop buying securities to allow them to liquidate their books as they mature (Quantitative Tightening). Both Fed actions will put upward pressure on interest rates. Given June’s strong CPI estimate, the Fed will come under increasing pressure to act aggressively to bring the inflation rate back up. The bottom line is that we are going to be in a rising rate environment for the foreseeable future. I think we can expect a minimum increase of 75 basis points following the July FOMC meeting and we could see an even more aggressive increase of 100 basis points. If the CPI doesn’t show signs of recovery by September, I think we’ll likely see another 75 basis point increase. Single-family and multi-family building permits are down and residential mortgage applications are down by about a third. With another 150 basis point rise by mid-September, we should see a deeper slowdown in economic activity. We may see the Fed halt or slow the rate of short-term rate increases after September.

I now have cash reserves on the sidelines which I hope to use in fixed income. I have revised my earlier planning and will likely start accumulating near-maturity debt securities after the July FOMC meeting; effectively build the short-term end of a bond ladder. To ease the uncertainty of timing, I prepare early with a list of baby bonds and preferred stocks.

Over the past two months, I’ve been putting together a list of baby bonds for possible investment. I say “possible” because it depends on how individual bond prices stabilize after another 150 basis point increase in short-term rates. The list contains about 66 issues and I plan to invest in about half of those 66 issues. To put some objectivity into the process of selecting the individual securities I will choose for investment, I have plotted yield against credit rating. This allows me to select securities that offer an above-average yield for each credit rating category (“Unrated” through “A”). The list is in the form of an EXCEL spreadsheet and the column headings should be self-explanatory.

I had to split the baby bond table in half, the other half follows directly below.

I’ve sorted the baby bond list by maturity date rather than by symbol as in the previous article to make it easier to construct the short-term portion of a bond ladder.

Readers should note that because baby bonds are exchange-traded debt securities, the price fluctuates throughout the day. As a result, the prices shown will be different from those you will find on securities trading this coming week. Most issues trade below par ($25) with a handful still trading at par or above par. After a few more rounds of short-term interest rate hikes from the Fed, I expect all of the bonds in the above list to trade below par. As a general rule, I don’t invest in bonds selling above par unless there is a special circumstance that compensates for the price above par.

All baby links in the listings above are included in the table below. The graphic, as presented here, is simply an image pasted into the article. In my EXCEL spreadsheet, the points in the chart are linked to the corresponding title in the lists above. As mentioned above, I use the table below as an aid to selecting bonds that are yielding above average for their credit rating group. I may ultimately decide to invest in a stock that falls below the fitted power curve line, but at least I have enough information to make that decision.

One of the quibbles that readers might have is my choice to assign a value of 0.5 to the pseudo credit rating for unrated securities. This is somewhat arbitrary, and if I had assigned a value of 0 instead, the fitted power curve would have a slightly less negative slope near the vertical axis (between 0 and 2). This would lower the curve a bit for 1 (BBB-) rated securities by putting a few more issues above the line compared to below.

I should probably note here that the yellow highlights in the baby bond listing and the preferred stock listing are to remind me that these issues are either fixed in floating rate or reset rate securities. This is important to understand for anyone considering investing in these types of securities. A good website for information on exchange-traded debt and preferred stocks is Quantum Online. The site gives a very good summary of fixed income terms and I highly recommend reading up on any exchange traded debt or preferred stock before making a decision to invest.

Similar to the baby bond list, I have a chart of current yield versus credit rating provided below.

I plan to retire in the third quarter of this year. This will be the second time I’ve tried to retire; the first attempt (at age 55) was derailed by boredom. This time I think I will stay retired. So for me, the Fed’s plan to raise rates and reverse quantitative easing to fight inflation is a welcome change. I have money that I need to work and I already have a large stock portfolio. The ability to invest in fixed income securities at decent yields is a very welcome change from the historically low fixed income yields of just 18 months ago. With fixed income securities having fallen about 10% to 27% over the past year, not only will I get a decent return, but I will get capital appreciation when interest rates moderate, the stock will be called or the security will expire.

June’s strong inflation estimate makes it more likely that we will get an aggressive short-term rate hike from the Fed at the end of July. I expect the valuations of the baby bonds and preferred stocks I have selected to fall (and yields to rise). I’ve never been good at predicting the exact bottom (or top) of any of the markets. However, I can’t have too many problems starting short of a bond ladder and I think yields will be more favorable after the July FOMC meeting.

The most effective ways to solve your problem